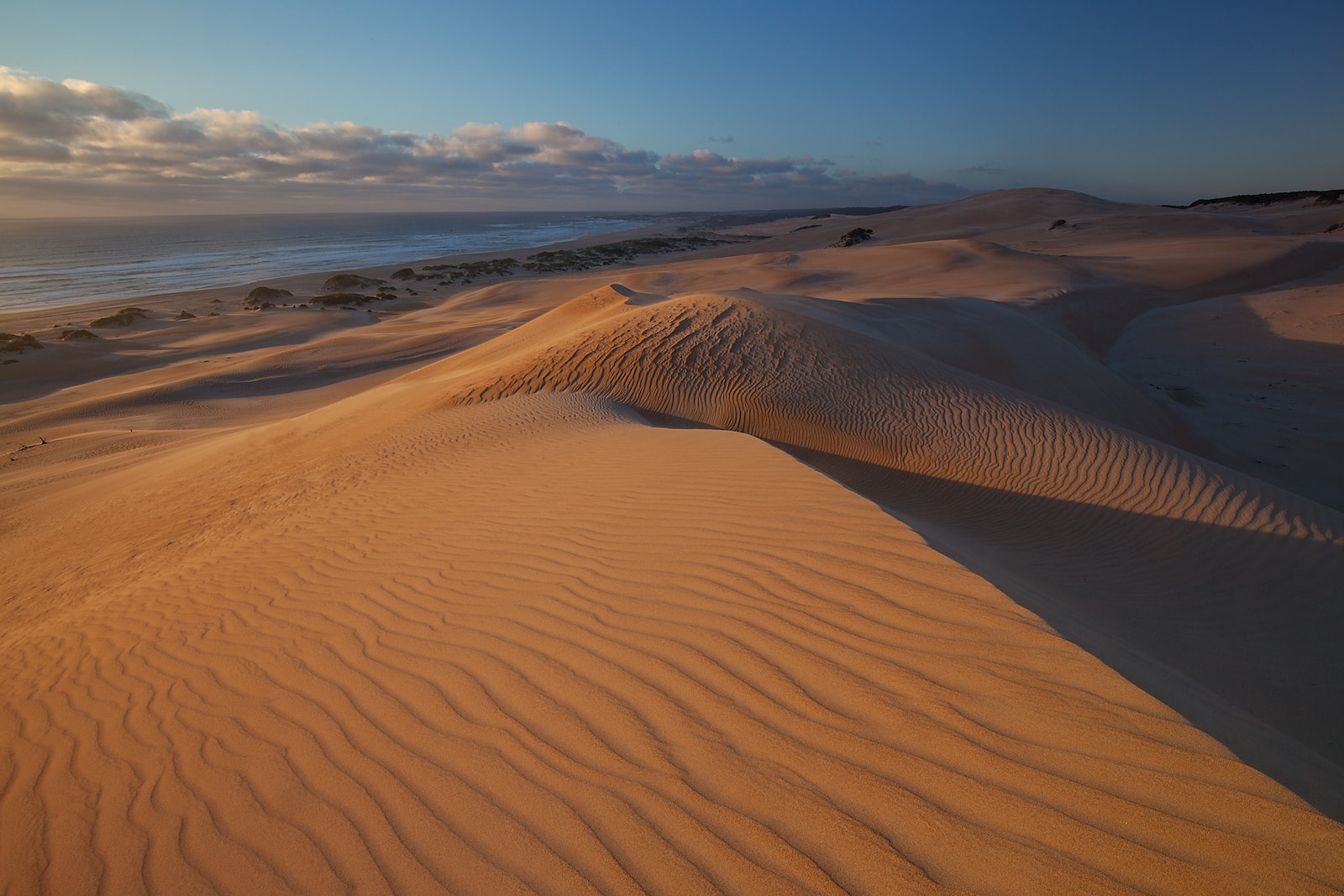 Sitting on the spirit of Tasmania ferry, I was day dreaming about the rugged and wild west coast of Tassie when my thoughts were interrupted by the loud speaker 'We are now arriving in Devonport'. A wave of excitement came over me, my adventure was about to begin. I was going to hike along the Tarkine Coast. There is limited information about the hike but I was confident I had prepared enough to do it solo.

The Tarkine Coast Hike is a 70km walk from the mouth of the Pieman River north to Temma. It's one of the worlds most wild and spectacular coastlines. An unbroken stretch of ocean spanning half the globe whips up insane surf and winds. Immense sand dunes dominate at least half the hike as well as coastal meadows, heathlands, rocky headlands, gulches, rivers and creeks.

The weather report for mid November didn’t look too bad. I was prepared to be sand blasted by the roaring 40's and horizontal rain, but the forecast showed a little sun, rain and not too much wind. Happy days! I downloaded the necessary TasMaps, photocopied the Tarkine Trails track notes and had a chat with the Ranger at the Arthur River Visitor Centre. Once the boat shuttle was booked, I did a food shop for 10 days and headed down to Corinna.

Leaving my car at Corinna, I boarded the boat shuttle for a 10am departure (you catch the same boat as the normal Pieman river cruise, they just drop you off on the northern bank at the mouth of the river). The boat shuttle cost $65 which included lunch and a cuppa. The boat docked on the southern river bank where everyone else got off and the skipper took me across to Hardwick Point on the northern bank in a dingy. I was dropped off about midday, plenty of time for my stroll up to Rupert Point with my mega heavy pack. I met a guy on the boat who was a tour guide and had done the coastal hike. Really lucky as he gave me some great tips, like camp at Rupert Point where the rocks are most impressive. He also eased my fears about drinking water, quicksand and river crossings.

So I headed north along the coast, smile on my face, sun shining, the wild west coast looked more like the blue skied east coast today. I was nearly tempted to swim. About 3km later I arrived at Rupert Point, happy it was just a short day as my pack was bloody heavy. I had packed close to 10 days food as I had to hitch a ride from Temma back to Corinna and who knows how long that would take. I set up my tent, cooked a feed then scoped out sunset and sunrise locations. Rupert Point is geologically amazing. So many folds and twists in the rock with plenty of different angles and foregrounds for photography. As the big waves crashed and the clouds rolled in, I ran around the rocks capturing plenty of shots. 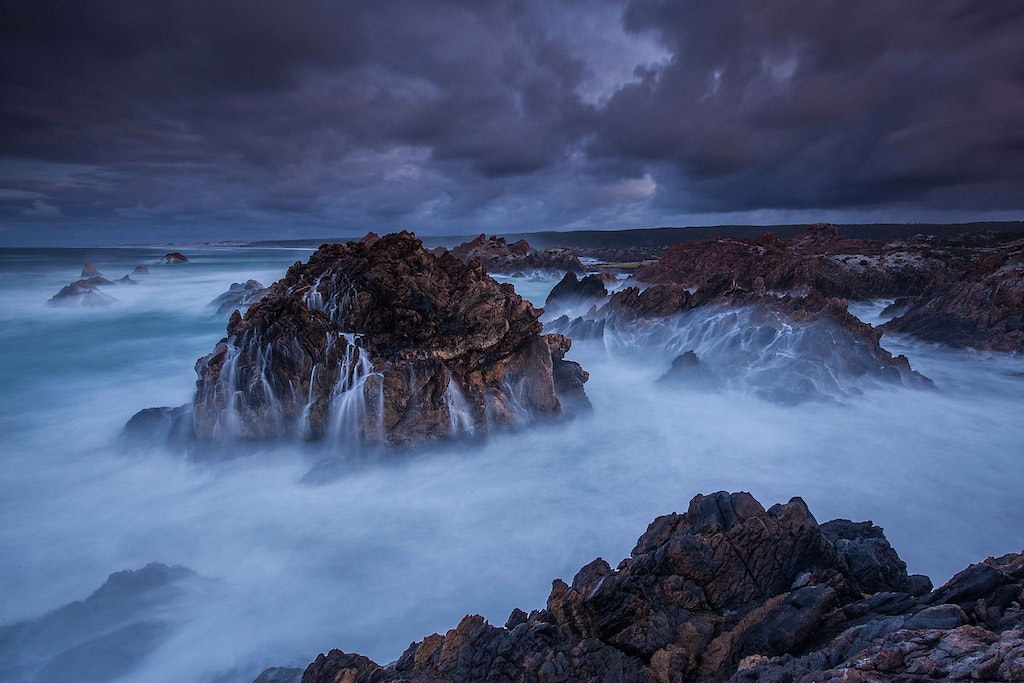 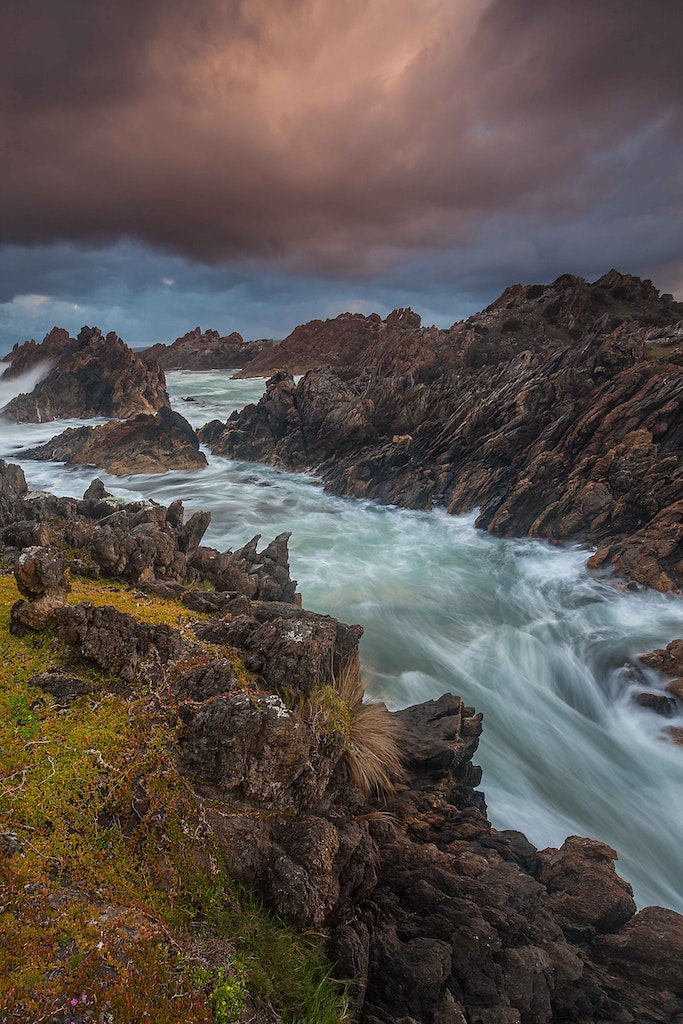 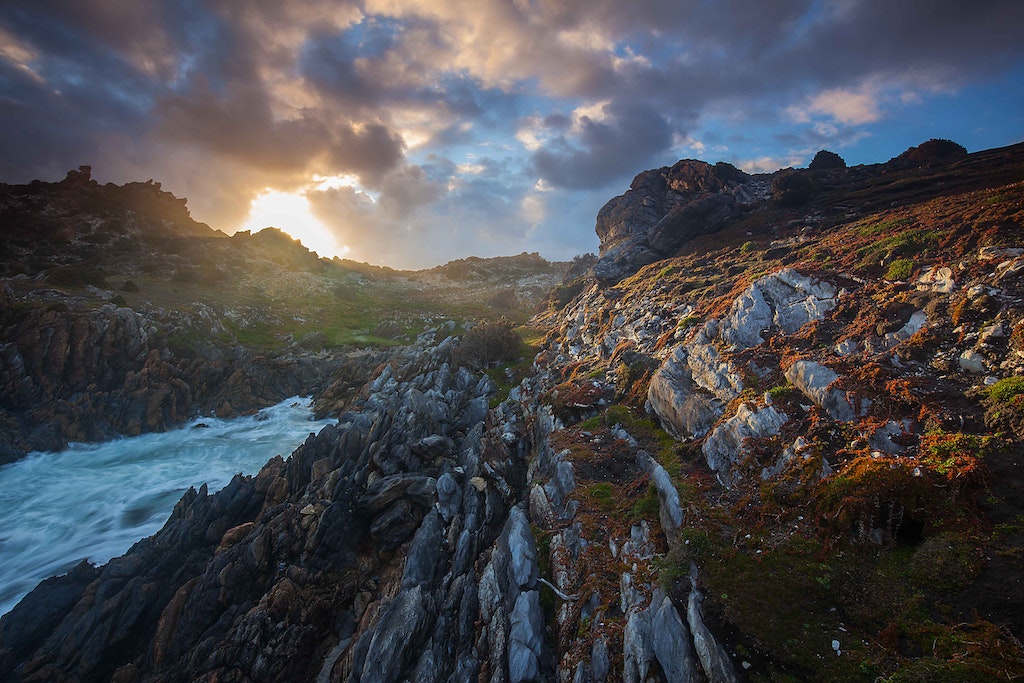 After sunrise shots and another sleep, I explored up the coast. Spring time in November is perfect for the wild flowers. The native pigface was prolific. This section of coastline offers plenty of eye candy: rocky islands, gulches and reefs. The sun was out again, wombats were grazing, sea eagles soaring, another stunning day on the west coast. I made it to the Interview river by the early afternoon, set up my tent and went for a swim. The river wasn't super deep but enough for a wash, I still couldn't believe how good the weather was. I was expecting to be huddled in my tent and here I was splashing around. The massive sand dunes start at the mouth of Interview River, so I sussed out photography locations for sunset shots. 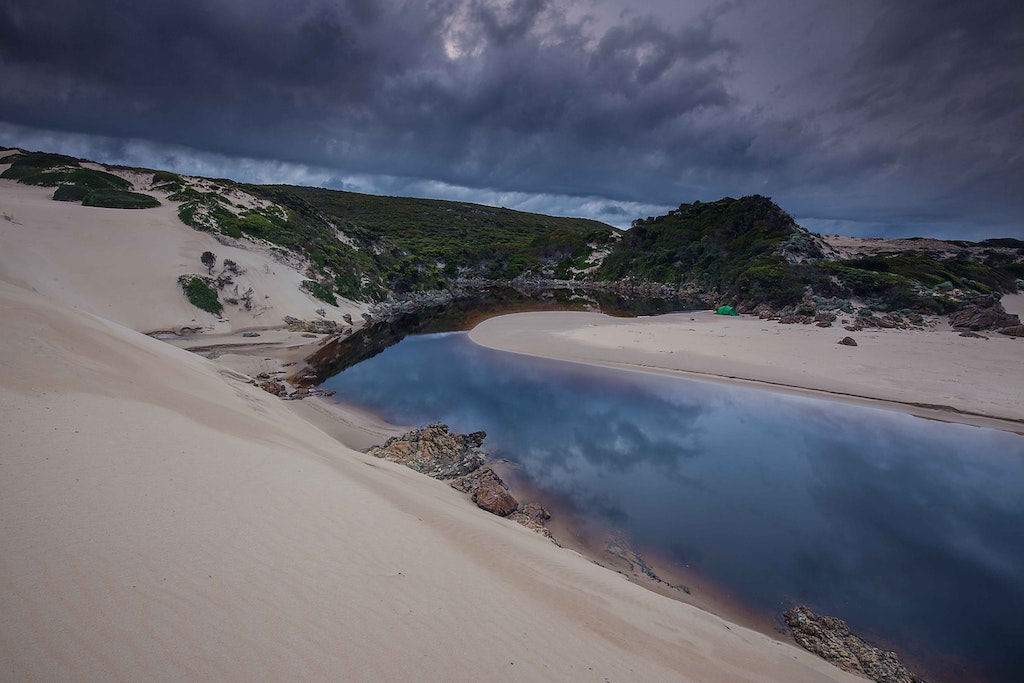 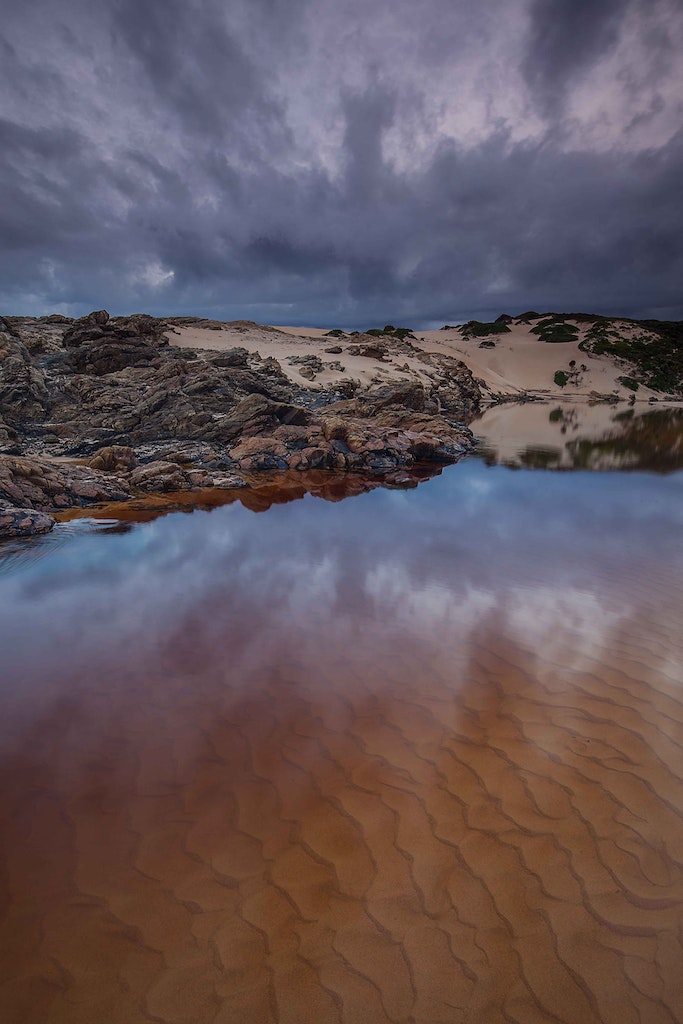 Straight after sunrise photos I hit the beach to have an early start for the long day hike ahead. It was an overcast day, slight breeze and perfect for hiking (previous days were actually quite hot). This was the wild, remote and rugged coast line I had been dreaming about on the ferry. The waves rolled in from the west and huge dunes rose to the east and there was no one else around. I punched out some bigger kms and made it to Lagoon River by 1pm and had lunch. I decided to keep moving, so as the dunes finished, I followed the rough 4wd track through the heathland. I passed majestic bays with large bull kelp clinging to the rocks surrounded by mind boggling huge middens.

I was wondering where I should camp when I saw this monster sand dune in the distance. Hmmm, could I make it there in time for sunset? I gave it a shot and as I crossed the last creek (Sea Devil Rivulet) I found the perfect camp site tucked behind some small dunes. I set up the tent and raced to the top of the monster dune for incredible views along the coast and witnessed the sand glowing in the last light. I slowly hobbled back to the tent and nursed a few blisters before bed. 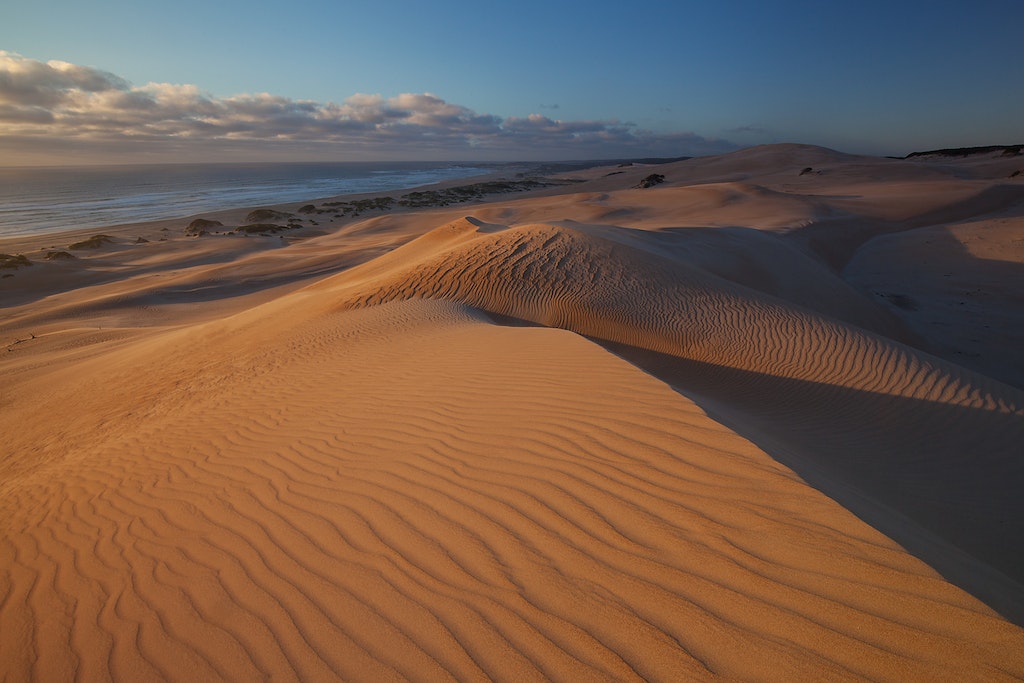 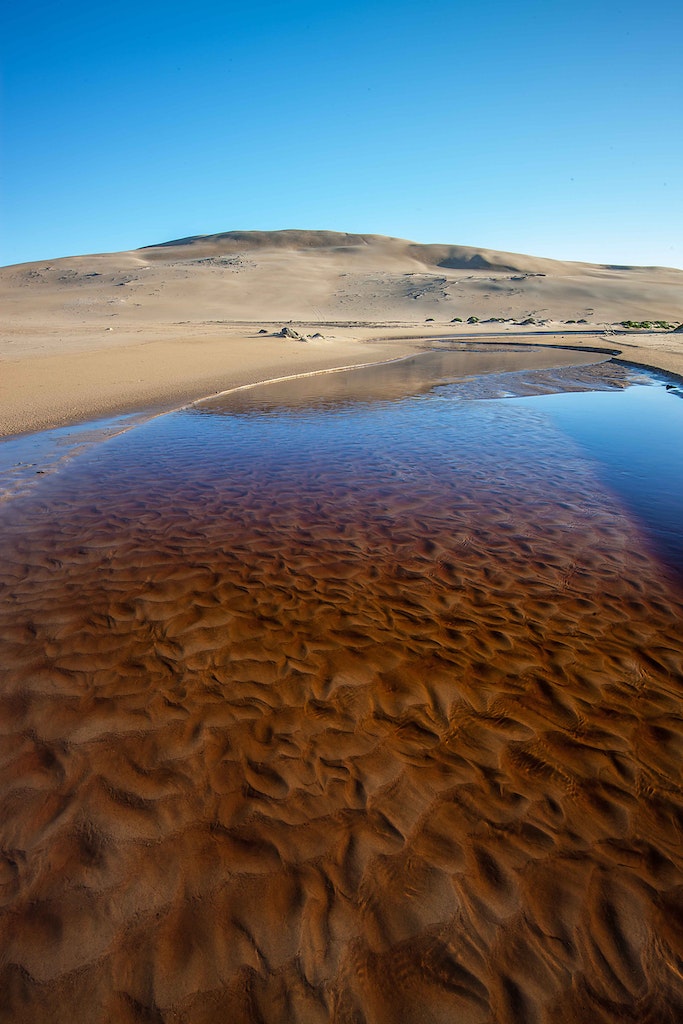 After a sunrise session on the dunes I packed my gear. Everything was getting full of sand but that was all part of the journey. At least it wasn't gail force wind and rain. It was heating up already and the one thing I forgot to pack was sunscreen so I wrapped a t-shirt over my head and hit the beach. I passed through Native Well Bay and decided to follow the coast instead of taking a 4wd track to the lighthouse - and I'm so glad I did. Such beautiful scenery on the southern section of Sandy Cape. Bright green vegetation, mixed with wild flowers, rocks, sandy beaches and small creeks. I ate lunch on a log and soaked it all up before I made my way to Sandy Cape lighthouse. With 1 bar of service, I rang my girlfriend to let her know I was alive and hadn't been swallowed by quicksand.

Here, at Sandy Cape, I bumped into the first people on my hike. There is a 4wd track to Sandy Cape and it was a Saturday so a few locals had driven down for a BBQ. I declined the offer for a cold beer (what was I thinking!) and carried on north along Sandy Cape Beach. After 6km I reached another appealing sand dune just north of Wild Wave River. I made camp and headed to the summit. This dune was impressive, but the wind had picked up and was blowing a lot of sand over it. I managed to snap a few shots at sunset and headed down for a feed and sleep. 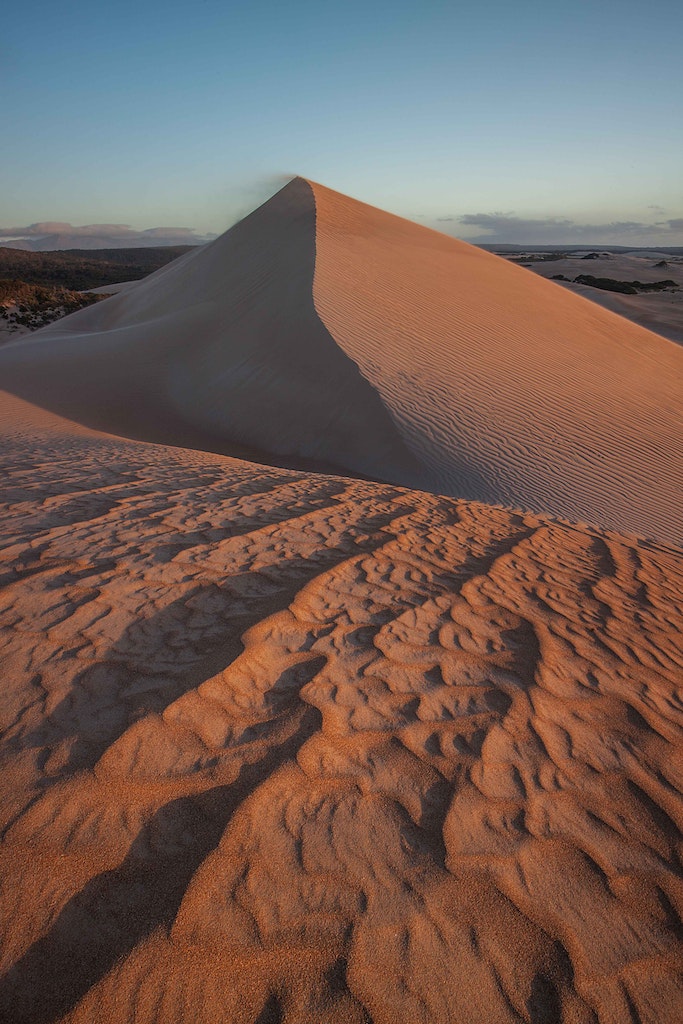 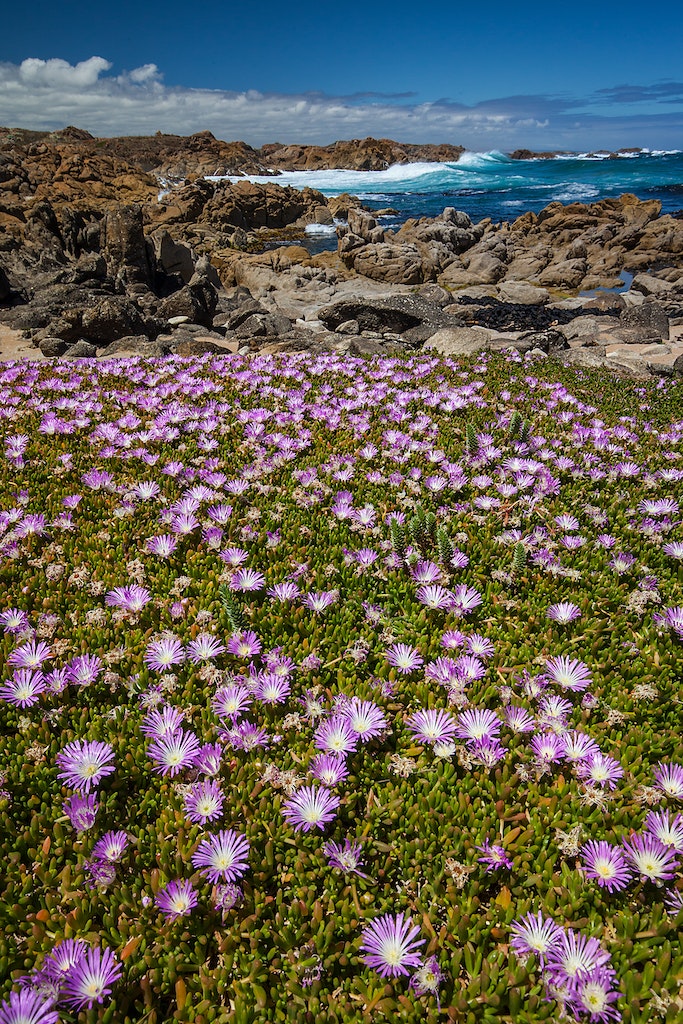 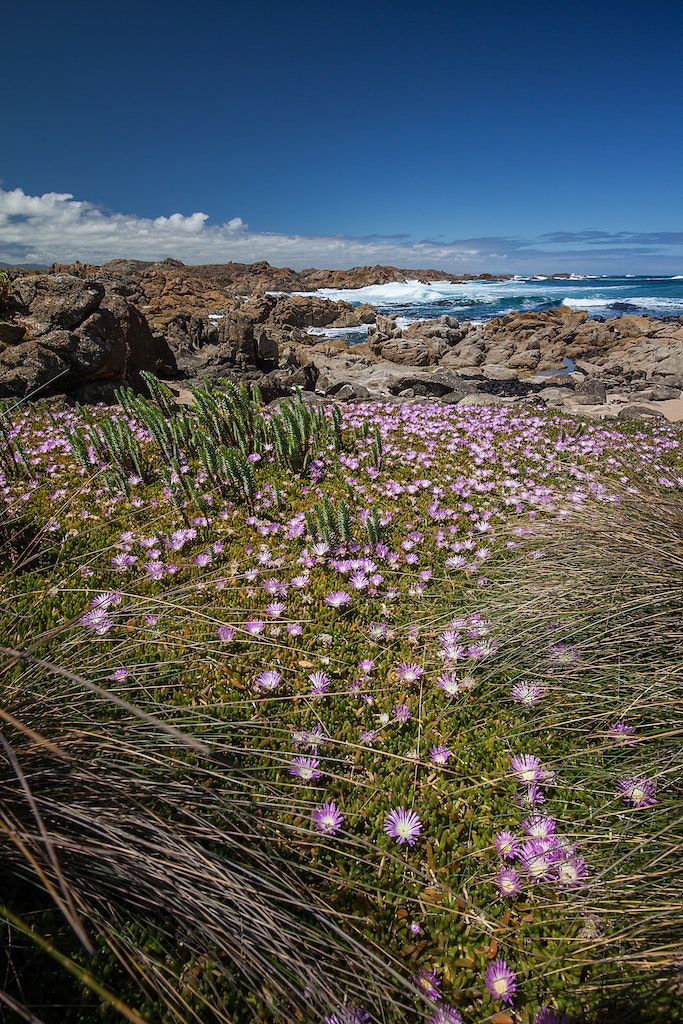 Sunday, fun day. The final day I finished the last few kms of Sandy Cape Beach and ran into more 4wds, dune buggies and motorbikes. I headed along the rocky coastal heathland to Ordnance Point. Just north of the point is what the locals call "Jack Smith's". There are a few shacks over looking a gorgeous bay, perfect for snorkelling and I couldn't resist taking a few shots. I had decided to camp close to Temma, so I passed through a number of bays hugging the coastline. The 4wders were using the Sandy Cape track, so I was on my own again. As I rounded Hazard Bay to Eva Point, wombats grazed on the coastal meadows and I spotted my camp site, Richardson Point. Not the best camp site in the world as I found out. The wind picked up over night, it was rather exposed. I had to drag my tent into a ditch at 1am to prevent being blown off the edge. So only for my last night did I experience the typical west coast weather.

In the morning I hiked the last couple of kms into Temma and managed to hitch down to the Lindsay River on the Western Explorer Road. The next morning I was lucky enough get a lift to my car at Corinna.

The Tarkine Coast Hike lived up to my expectations and then some. I got really lucky with the weather. I can imagine it would be considerably less enjoyable with the roaring 40's. The hard parts: sand in everything, blisters, sunburn, the worst leech bite of my life and the remoteness if things went wrong. Of course wind and rain should normally be added too. The best parts: the amazing rocks at Rupert Point (and all the other rocky jagged coastline), discovering the beautiful gulches, bays and springtime flora, marvelling at the biggest sand dunes in Tassie and the solitude of hiking alone on one of the most spectacular remote beaches in the world. There are a lot of warnings about this hike. After rain the river crossings will be swollen, but they were only knee deep for me. It is very exposed to the elements, so you need to take the right wet weather gear. There are untracked sections but its fairly basic navigation (sea on your left, land on your right). No phone service so take a Satellite phone or EPERB. There can be snakes (although I didn't see any) but there are snakes everywhere in Australia, so just wear gaiters and be careful. Finally the quicksand - I didn't experience any, but I assume it's worse at different times of the year. So if you have done the required preparation and are an experienced hiker, I think you will enjoy this walk.

If you have any questions, just leave a message on my contact page.